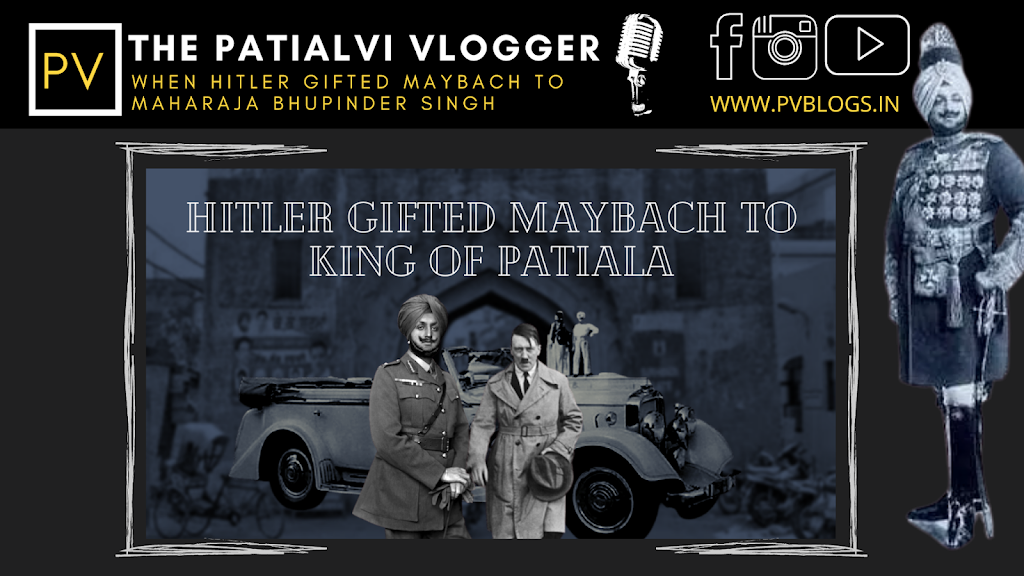 Welcome to PatialviVlogger.com – A blog hosted by Devansh Kaushal

I wish you all a very happy new year and may this year 2021 bring you great happiness, prosperity, and a healthy life.

SERIES: The amazing stories of Patiala

So when we talk about Patiala. This city has its own feeling It is one of the royal cities of India, whenever one looks at the history of Patiala we always get good non-fiction good news and the Kings of Patiala had well-known contacts in the community. And yes He also had a good relationship with Adolf Hitler. So in this blog in the next few sections, you will read about the story of Maybach, Hitler, and Maharaja Bhupinder Singh.

Maharaja Bhupinder Singh was the king of the princely state of Patiala in Northern India. With the fertile lands of the Punjab under his rule, the king had great wealth. Maharaja Bhupinder Singh was known for his love of rich treasures and expensive things. Maharaja had more than 50 royal cars in his garage which included Roll Royce and other expensive Maybach. Maharaja was also famous for his travels around the world.

MEETING WITH A HITLER

In 1935 Maharaja Bhupinder Singh applied for nomination with Hitler. After much hesitation, a meeting was scheduled for Maharaja’s 15-minute appointment. When the conversation between Hitler and the Maharaja began, it extended to a full hour. Hitler invited Maharaja Hitler gave Maybach a Zeppelin engine to Maharaja. Hitler wanted to increase his friendship with the Maharaja, so the aristocratic country of Patiala was neutral in the event of a war between Germany and Britain. The only time Hitler presented the car to the king was for the King of Egypt and the King of Nepal.

WHERE IS THE MAYBACH NOW?

The car remained with the Patiala royal family until it was presented with a gift in 1957. Raja Malvinder Singh (Present Raja’s younger brother and state CM) tells the story of how the family lost Maybach in 1957.

“I think he was the only Maybach of this type who survived the war. I was sitting one day at Patiala House, Delhi. I was reading jokes when my father came in with Sardar Sukhjit Singh Majathia after a golf game. The ADC came and said Sardar Satyajit Singh had come to see my father. what they say.

After a while, Sardar Satyajit Singh, ADC to his father said, ‘Sir, I have to come and ask you for help. You have this Maybach you have never used. Can I buy it for you? My father said, ‘I don’t sell cars here, but if you want it as a gift, you can take it.’

We had an Australian man named Harvey who was in charge of the garages and Sardar Satyajit said, “Sir, you can give it to me in writing as Harvey will not give it to me.” sold it and now there is a private collector in the United States and probably worth almost five million dollars. “

Thank you for spending your precious time on PVblogs. If you have any questions / complaints and / or questions related to the promotion, you can send us a message on Instagram and email us at devanshkaushaloffice@gmail.com or fill out the form provided below for your query. You will receive a response within 12 hours of your message.