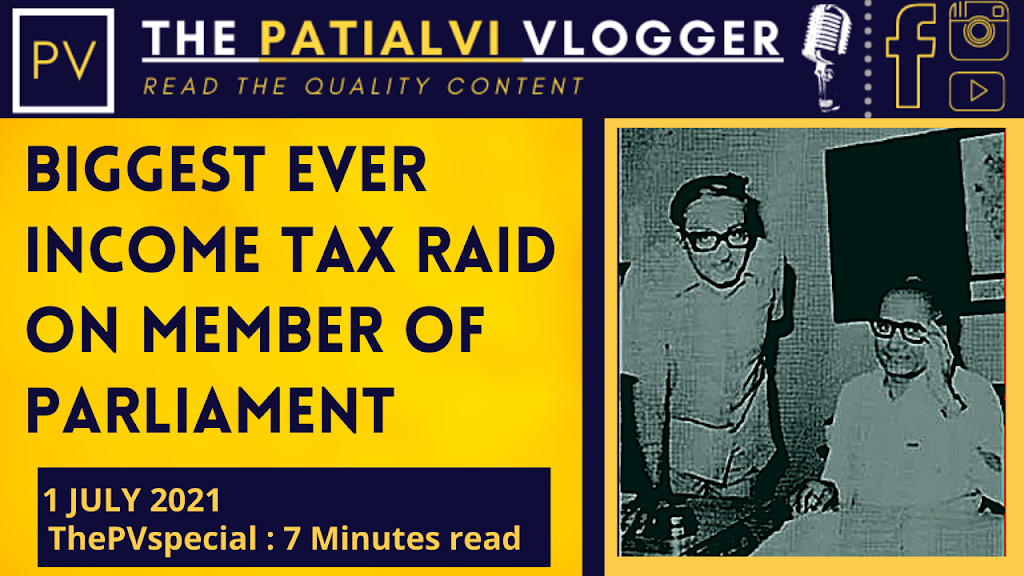 Introduction to the Biggest ever raid on Member of Parliament

About 40 years or 4 Decades back when India was struggling to stand on its economic that era many Tycoons and politicians were taking the front. Sardar Inder Singh was also one of them, He had a well-established name at that age and was one of the influential politicians in Undivided India. Sardar Inder Singh served as a Member of the Legislative assembly from Punjab during the pre-partitioned era of  (1946 to 1951) and later as an MP (Member of Parliament – Rajya Sabha). Inder Singh was the heading industrialist of India from 1950 to the grave. In 1928 Inder Singh set up India’s first steel re-rolling mill at Singh engineering works Kanpur.

The further truth narrative is going to be based on India’s most extensive and Longest Income tax raid on member of Parliament and industrialist, This raid is believed to be the most extended raid ever in the history of the golden country India.

It was the daylight of July 16, 1981, when Sardar Inder Singh was having the morning tea and he had no hint at that time that his house is going to be raided by the I.T officials in the city of Kanpur. The sunshine of 16th July began unobtrusively enough. When Deputy Director (Intelligence) Mr. Alak Kumar Batbyal who directed the raids on the first day, left his residence in Swaroop Nagar with a staff of other officers nobody gave the smallest attention. As per the recital of Ram Autar, 45years, a rickshaw driver in the territory: “I deemed the officers were leaving for a morning walk.”

When the clock reached 8 in the morning the raid had begun. Concurrently other groups were raiding houses relating to members of Inder Singh’s house in various communities like Tilak Nagar, Arya Nagar, and Lajpat Nagar, the most embellished colonies in Kanpur. Simultaneously all the factories of Singh Engineering Works Pvt Ltd located in the Fazal Ganj and Panki were sealed and 15 bank lockers in distinct names in Kanpur, Delhi, and Mussoorie were opened.

The department had choreographed the raids deliberately as More than 90 men officials had gathered for the raid. As there were not sufficient officers to manage the job some upper-division assistants were also enlisted to help out and 200 policemen had been summoned in to assist in case the income tax men met with any opposition, but they were not needed.

How much money was recovered in India’s Biggest ever Income Tax Raid?

In the lockers in Delhi, exploration parties detected Rs 72,000 in cash and fixed security deposit receipts meriting about Rs 1.10 lakh. In all a roundup of Rs 1.3 crore. As it swung out there was still more extra to come. In the subsequent two days, six gold blocks of 250 tolas deserving Rs 30 lakh were seized from two lockers in Kanpur. And the game is not over yet more things were to be revealed.

Even counting the excursion has been a daunting job. The local section of the Reserve Bank of India (RBI) has had to jump in to help. Sayed Raza Zaidi 50, the chief manager of the RBI Speaks: “A distinctive room was set apart and 45 people including some deputies were deputed to calculate the cash and still then it took more than 18 hours.” The RBI had to entertain their cash vans accompanying with gunmen to transport the distance.”

He joins that notices have been worked on Inder Singh, his wife Mohinder Kaur, 45, his four boys and two sons-in-law, and a dozen additional members of the house. All the lockers at the Punjab National Bank branch in Swaroop Nagar, Allahabad Bank (Swaroop Nagar), and Hindustan Commercial Bank (Arya Nagar) has been sealed by the IT officials and the proprietors of the lockers were mostly members of the Inder Singh family, have been directed to go to the bank on various days for a search.

The thing that highlighted this income tax raid is the personality of Inder Singh, one of Kanpur’s leading industrialists who established the first steel re-rolling mill in Uttar Pradesh and who still retains the biggest re-rolling plant in the country. He is a prior member of the Rajya Sabha and is adjacent to the foremost lights of the ruling party. He had been mayor of Kanpur two times.

The reason or the mystery behind this raid was Inder Singh’s wife is the sister-in-law of Suresh Ram, son of the former Union minister Jagjivan Ram and it is implied that this relationship is the authentic reason for the problems of the Singh house. But income tax officers remain silent about such matters. But at the end of the day, we all know that This raid was the biggest ever raid in the History of India.

This was the story of India’s longest ever Income tax raid but we believe that every a person should earn good but he should also return goods to Government in form of Taxes will help to boost up our economy and to stand among the top countries in the world. This whole fabrication is inscribed by Devansh Kaushal. If you liked the article then you can inspect his Website and Instagram. Thanks for reading till here.