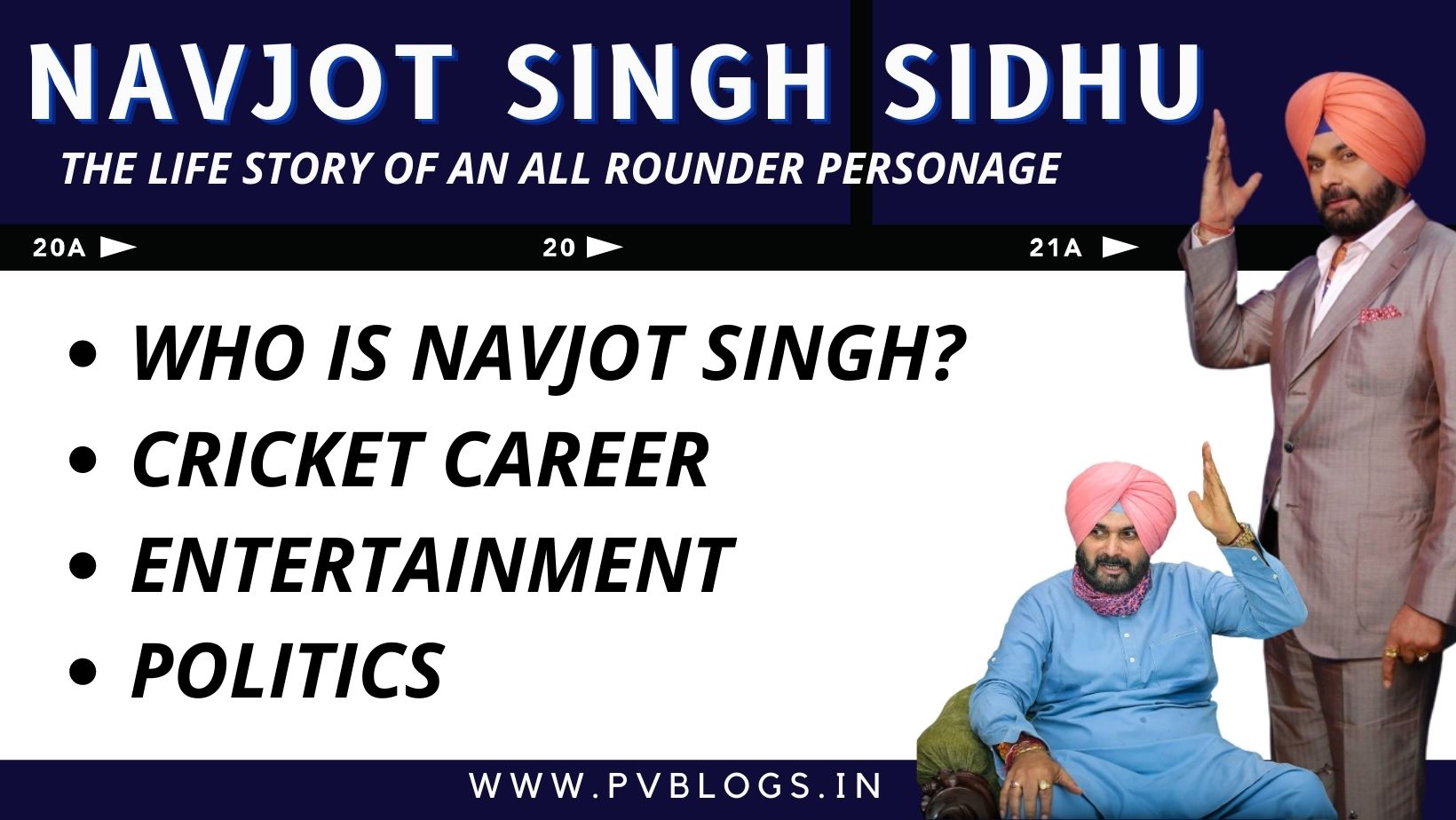 This blog will revolve around the Classic and retro kind of life story of our Mister, Cricketer, Entertainer and Politician one and only Navjot Singh Sidhu. He is the person who has made the politics of Punjab state totally different position as it was a year ago.

Cricket Career of Navjot Singh Sidhu
Navjot Singh was born and raised up in a middle-class Sikh family in the royal city of Patiala, he studied in Yadwindra Public School Patiala. Began his career in cricket in the bright year of 1983 to 1999. Navjot has experienced many ups and downs in his life and also been in Media headlines in many news publications like India Express which was penned by cricket Journalist Rajan Bala, He named the publication “Sidhu – The stroke less Wonder”. This was the historical article that resulted in constructive criticism for Sidhu and helped him to stay more focused and motivated which consequently boosted his performances and He gave a mind-blowing performance in the world cup of 1987. Sidhu performed with a mind-blowing performance in the test matches against West Indies in the years 1996 and 1997. In the year of 1999, he said goodbye to Indian Cricket and took the domain of commentary. He served as a commentator in 2001 when India toured Sri Lanka in the year 2001. Later he was appointed by ESPN SPORTS NETWORK and then he joined TEN Sports. Today He is a famous and popular Hindi Cricket Commentator.

In the above paragraph, you’ve read about the synopsis of Sidhu’s Cricket career but as we all know Navjot has never backed to learn in new domains and for the same reason he started exploring the entertainment industry with Television shows like The Great Indian Laughter and a real-life contestant in Big Boss which is a reality show. But how we can forget Comedy Nights with Kapil and The Kapil Sharma Show. He has always received immense love from the audience for his appearance in these shows and his great poetry. He has also gained the titles like “Sidhuism” and “Sher O Shayari”

Moving towards the Political life of Sidhu, Navjot has been a prominent face of Indian Politics and he won Lok Sabha membership on the ticket of BJP from Amritsar City in the bright year of 2004. Navjot has seen many ups and downs in his personal and professional life which never affected his personality. Sidhu always lives with a Positive Attitude and this is the quality of him that is admired by many of his followers.

After winning the elections of 2004 from Amritsar he again won the  2009 Lok Sabha elections defeating an influential leader of the Indian National Congress – OP Soni ( OM PARKASH SONI ) by the difference of 6858 Votes from his home seat of Amritsar. He did not contest the 2014 Lok Sabha elections from any Seat – Constituency when Arun Jaitley was given the ticket from Amritsar. He became a Rajya Sabha member in 2016 on 28th April and Resigned from Rajya Sabha on 18 July 2016
Later in 2016, he formed his own Political party with the Bains brothers and Pargat Singh.

He joined Indian National Congress in 2017 January and won the 2017 assembly elections from Amritsar and became Minister of Local Bodies. When the reshuffling of Captain Amrinder Singh’s Cabinet took place then he was given the Ministry of Power and New and Renewable Energy Resources. Navjot tweeted his resignation from the Cabinet of Punjab Government on 10 June 2019 and addressed the same to Rahul Gandhi.

Congress President Smt. Sonia Gandhi appointed Sidhu as the president of the Punjab Pradesh Congress Committee. On the date of 28 September 2021, He resigned as chief of the PPCC but the High Command of the party rejected his resignation. He took back his resign on 5 Nov 2021 as Punjab Congress chief.