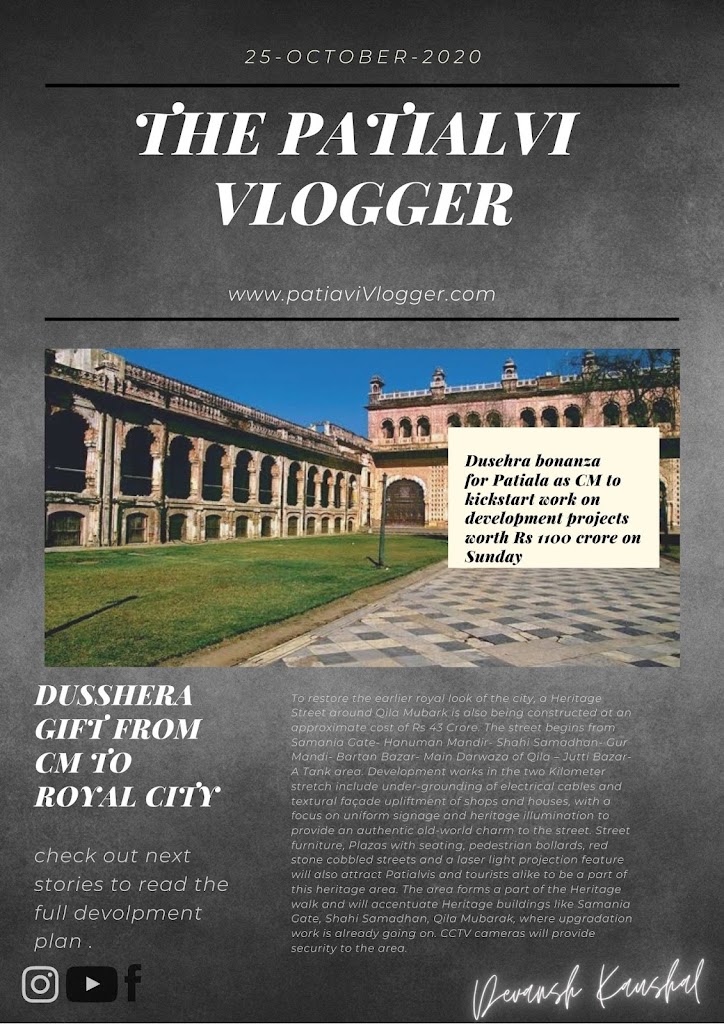 This article is going to discuss how the development program will be executed by the CM and District administration of Patiala, the budget, and the area in which the plan will be accomplished. The work of heritage street will be started soon and we hope that MC Patiala and CM will ensure to complete the project by meeting citizens demands

As we all know that Patiala is one of the oldest and royal cities of Punjab and It was founded by Baba Ala Singh Ji. We all are listening to the news and rumors about the development and setup of a Royal Heritage street. The 1st official article was published by HINDUSTAN TIMES in June 2018 in which some information regarding the development of Patiala’s Heritage walk was released ( Including the outlook and blueprint of the street ) by the District administration. Click here to read that article.
But now in 2020, it is officially confirmed that the whole city will be in development and CM will work on the development projects worth Rs1100 crores by Today – 25th October 2020.

What will the development program consist of?

Chief Minister of Punjab Captain Amarinder Singh would commence his day with the opening of the construction activity of the first stage of this university whose total cost clinched at Rs 500 crore. Disclosing the details, Deputy Commissioner Mr. Kumar Amit has told that to strengthen the infrastructure of Punjab’s first sports campus or university, Maharaja Bhupinder Singh Punjab Sports University that was made functional with alternative organizations on September 17, previous year, a state of the art university would devolp up at village Sidhuwal (Adjacent to the Rajiv Gandhi National Law University). The first stage would have Academic Block, Admin Block, Boys Hostel, Girls’ Hostel alongside road development and parking, etc.

The subsequent episode of development would be voyaged with the laying of the establishment stone of New Bus Stand on Rajpura Road. The project would be achieved at the expense of Rs. 60.97 Crore. The brand-new bus stand and workshop would come upon a stretch of 8.51 acres and it has the suggestions of construction of Admin Block, Cash Branch, Bill Branch, Record Rooms, Workshop, Oil Pump, Workshop shed & Washing Greasing Dug, Lift for Movement, etc.

To restore the more preceding royal appearance of the city, Heritage Street throughout Qila Mubarak is also being erected at an approaching cost of Rs 43 Crore. The street starts from Samania Gate- Hanuman Mandir- Shahi Samadhan-Dal Dalia Chowk- Gur Mandi- Bartan Bazar- Main Darwaza of Qila – Jutti Bazar- A Tank area. Advancement works in the two Kilometer reach comprehend the under-grounding of electrical cables and textural appearance upliftment of shops and houses, with a focus on uniform signage and heritage embellishment to implement an authoritative old-world charm to the street. Street furniture, Plazas with seating, pedestrian billboard, red stone cobbled streets, and a laser light projection characteristic will also draw the interest of Patialvis and sightseers alike to be a part of this heritage area. The area constitutes a part of the Heritage walk and will accentuate Heritage constructions like Samania Gate, Shahi Samadhan, Qila Mubarak, where up-gradation work is already performing on. CCTV cameras will enhance the security of the area.

The fourth significant project, a 24×7 surface water accumulation project, that would provide the futuristic needs of the capital and also known as the lifeline of Patiala, would be anchored on pace by starting construction work on this memorable day by the Chief Minister Captain Amarinder Singh at Municipal Corporation Patiala. For this project, a land mapping of 24.6 acres for the development of waterworks has already been gained
Thanks for reading at PatialviVlogger.com If you have any kind of problem-related to my content, then you can contact me by mailing me at workfordevansh@yahoo.com. The following e-mail is also to be used for business inquiries.
Follow us on INSTAGRAM: www.instagram.com/patialvi.vlogger FACEBOOK : ww.facebook.com/pb11vlogger